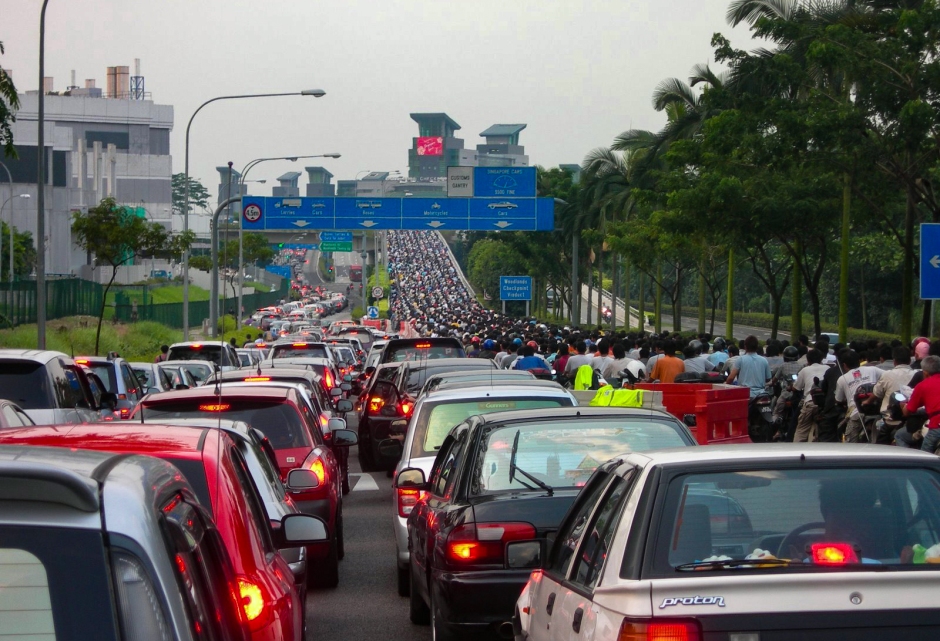 Singapore to Malaysia.  Doesn’t get much easier than that, right?  The two countries share a border after all.  As I’m sure you have figured out by this post’s title, things didn’t run so smoothly.  Let me elaborate –

Goal: Board the 10:00am train from Johor Bahru (JB) Sentral to Kuala Lumpur – Malaysia’s capital city.

Problem: JB Sentral is on the Malaysian side of the border.  We, obviously, are not.

“Solution”: No Problem!  We’ll leave way earlier than needed to make sure we make our train.  After all, our hostel is only 18 miles away from the border.

The morning of the rapture –

6:30 – We’re hopping on the metro line to Marsiling Station.  From there we will catch a bus to Woodlands Train Checkpoint, only 4 miles away from the border and the final stop before JB Sentral.

7:30 – From Marsiling we board an overcrowded bus to Woodlands.  Google Maps assures me that this 2 mile journey will take us 8 minutes.  We’re making great time.  Well… 8 minutes turns into 15 minutes which turns into an hour and a half.  I repeat – 2 miles, 90 minutes, with speeds ranging from 0 to 3mph thanks to an intersection from Hell in which three separate four-lane roads coming from the east, west, and south all converge onto a two-lane northbound funnel into Woodlands Train Checkpoint.

8:45 – We’re still on the bus with Woodlands in sight less than a quarter mile away.  “Fuck it” I imagine the driver mumbles in Malay as he swings opens the bus doors.  Passengers push and shove their way out, spilling onto the highway packed with cars, buses, and motorcycles as they make their way to Woodlands on foot.  We follow suit.

9:00 – Woodlands Checkpoint.  We’re still in Singapore.  Things aren’t looking so hot.  We get our passports stamped and rush to find a bus that will take us to JB Sentral only 3 miles away.  The bus station is a madhouse.  Hundreds of people trying to board dozens of buses that treat a two land road like its a five.  We join a crowd of roughly 300 people who are all trying to board the same bus.  The crowd funnels into itself into increasingly tight railings until we are force to line up one by one – like cattle at a slaughterhouse.  We’re not going to make this damn train.

9:50 – ‘Luckily’ for us, the bus was so packed that we had to stand in the doorway next to the driver.  Once the doors opened, we took off sprinting.  JB Sentral is the building next door.  There’s still hope!  And then I saw the line for Immigration.  We explained our situation to some kind soul who (probably had no idea what we were saying but could see the desperation in our eyes) let us cut in line.  But it was too late.  By the time we we’re handing over our passports we could hear the train whistling in the distance.

4:00pm – Thank God there was another train to Kuala Lumpur that day.  We made it to Malaysia’s capital by midnight.

TL;DR – It took three and a half hours to travel a whopping 21 miles.  Missed our train.  I was sad.